At the same time we were playing TAC7, Pierce and I were having a go at TAC9.  We always have 2 games going at once.

It’s strange how luck runs in streaks.  There are a number of players out there who don’t rely on luck as much as some.  In our ASL community we are all familiar with the names as they are generally at the top of tournament standings.  They are great players whose skill can overcome a small amount of bad luck.  I am not one of them and I am aware of it.  I don’t see it changing anytime soon.  I definitely rely on some good things happening at opportune times to be successful at ASL.  This game with Pierce started off as another exercise in a string of bad luck playing out and ended with some nice things happening to me for my second straight victory.  I’m not going to kid myself however.  This scenario is practically unwinnable for the Allied side……..and I had the Axis.

Lezongar Stronghold is a scenario that requires the Allies (American Engineers, Partisans and 3 Wolverines) to control two German pillboxes.  The German forces are garbage.  Mostly 2nd line and conscripts, average leadership and the usual array of support weapons.  Throw in an armored cupola with a 47L gun and 6 armor factors, a 75L anti-tank gun and a nice pile of wire and mines, and the Germans are still completely outclassed.

The Allies feature the usual rules regarding Partisans, the engineers bring a flame thrower to the fight and compliment it with 100mm artillery.

I should have put more thought into my set up.  Pierce has 8 turns to get through my units, fortifications and both pillboxes and has to cross the width of 2 boards to do it.  As it was, I think I actually made his job easier.

Pierce brought his forces on board down the German right in an effort to assault the pillbox on the hill.  I had no real shots on them until they got into the large grain field.  The radio came on and got set up on the raised road, beneath a Wolverine.  I got one shot only with the cupola, I really needed to get a crit to hurt the tank.  Pierce had no issues taking it out though, and the cupola was gone on turn 2.  The artillery found it’s mark knocking out the units inside the pillbox with ease. 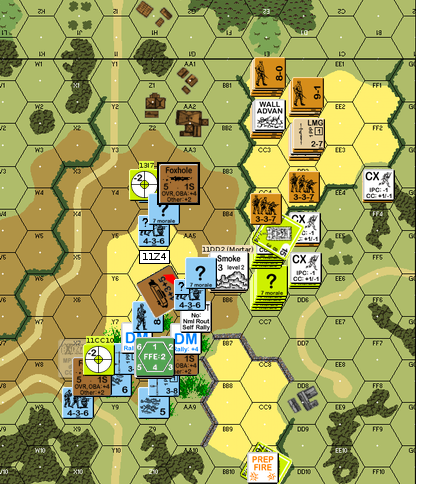 A couple of shots later including a KIA on the last 436 in the foxhole and Pierce had eliminated all of my units from the pillbox and surrounding hexes without getting within three hexes of it.  Unfortunately, it took him five turns to do it and he wasn’t wasting any time.

The stunned Wolverine made a play up the middle but the 75L burned him from a couple of hexes away.

With only three turns left to get into and control the second pillbox, Pierce moved his remaining TDs up to get fire on it.  My mortar put fire on the front one and got the stun.  A second stun ended up recalling it, leaving only one Wolverine remaining.

Pierce made a hail Mary attempt to get into the pillbox hex using armored assault, but a Panzerschrek shot burned the last tank, leaving the infantry to make the assault on their own.  Getting hung up on the wire with only a single move left forced Pierce to concede. 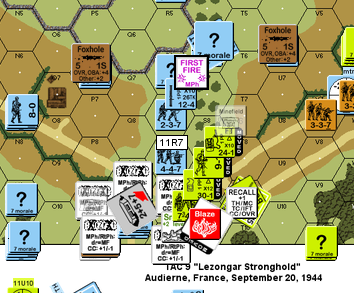 Time is the enemy in this one.  There simply isn’t enough time for the Allied side.  Pierce made a go of it, but even with me making a setup error putting the one pillbox on the hill, and absolutely everything going right for Pierce for the first 4 turns, he still ran out of time.

ROAR has this at 7-0 in favor of the Germans and it’s easy to see why.  Things started to turn for me halfway through this scenario, and I feel better moving on, that perhaps my crappy luck streak is finally at an end.

I got another Victory against Pierce, but I can’t chalk this one up to my good play.  This scenario is a mangy, flea ridden, rabid, three legged, barking howler and I was fortunate to be on the side that wins.

One thought on “TAC9 Lezongar Stronghold”