Mike and I got started on day 3 of our Festung Budapest CG and things weren’t looking terrible for my Russians.  I had won the first two days, and felt I was in an OK position.  I hadn’t suffered much damage and learned my lesson about field phones, but I couldn’t help feeling like I was behind the time crunch and needed to make up some ground.

The front lines had fleshed themselves out, with me leaning on the Boszormenyi ut on my right, and Roskovics utca / Rath Gyorgy utca on the left.

It was obvious from the start that Mike had decided to guard the ammo buildings with everything he could afford.  If I broke through to them, his ammo shortage levels would take a sharp turn for the worst

I made the decision to try to make a push up the center with intentions of possibly breaking through on the center right. 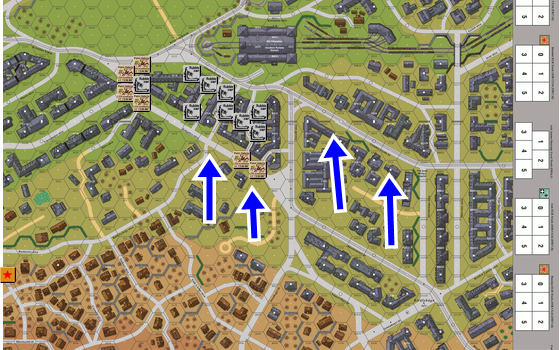 I figured I would hold on my left, push in the center and probe for opportunities on the right. 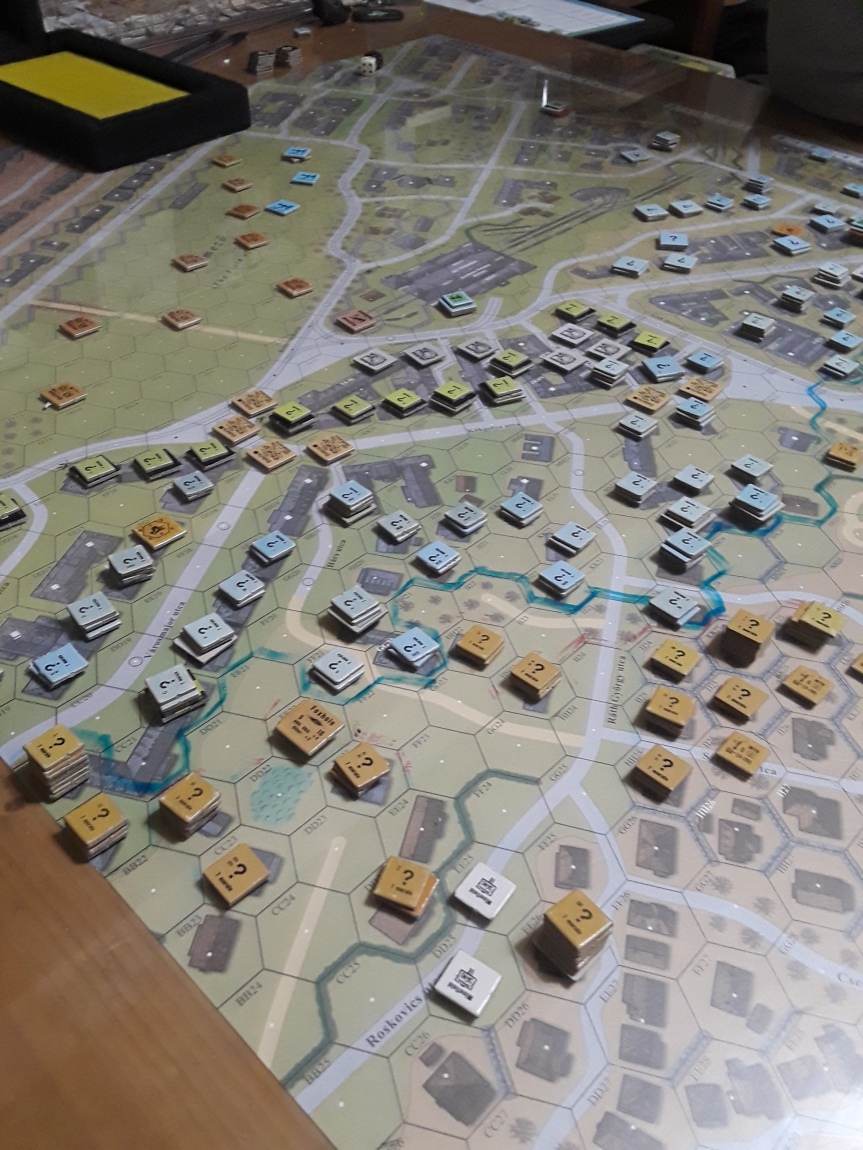 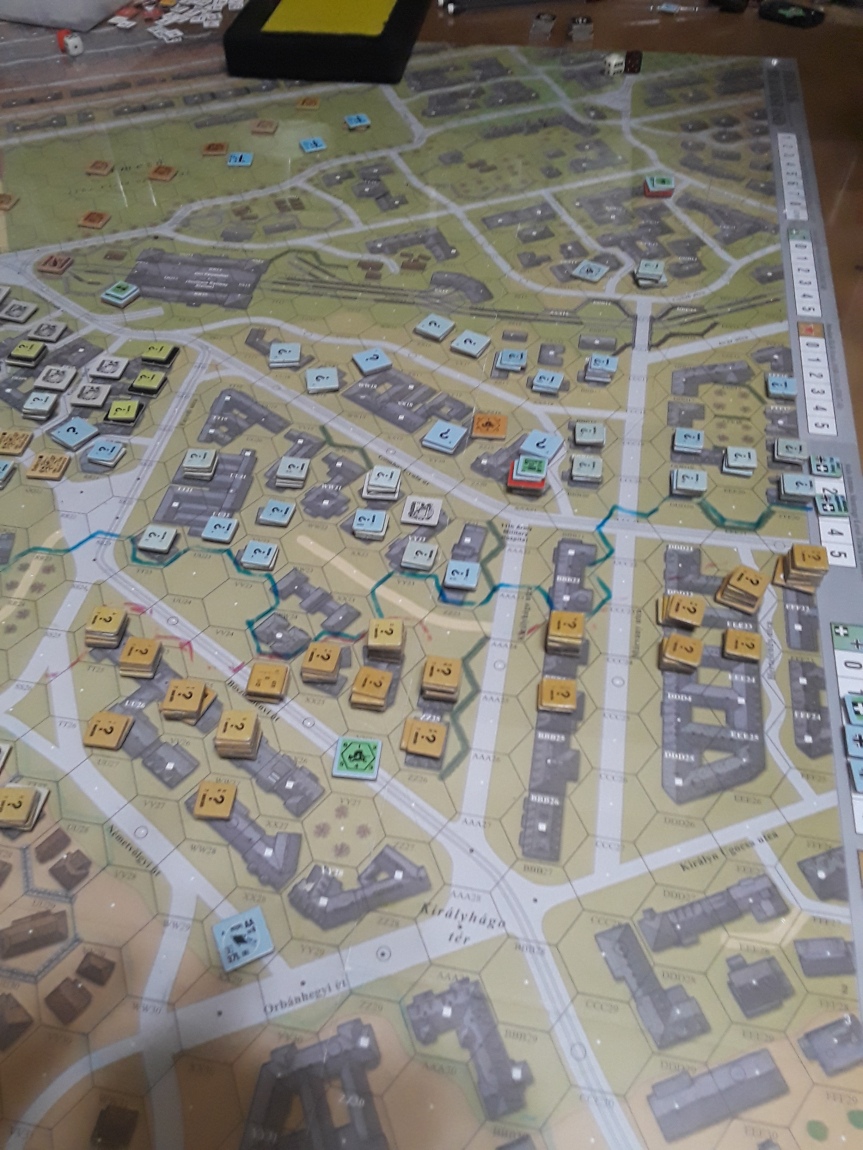 I bought the practically free T34-85s every day.  Cheap and plentiful, they were more than a match for all the German / Hungarian vehicles except Panthers and Hetzers.  By this time, Mike had purchased Hetzers.  I accomplished my goals, taking the areas I had targeted.  I made a probe on my right where I had made such good progress the first two games, but Mike elected to bring in his reinforcements in that area and pushed me back.

He tried some stupid tank tricks (that almost worked) when he drove a couple of Hungarian tanks into my backfield, but my T-34-85s chased them down and dispatched them.  It’s what he does.  See an opening, assess the risks and the costs and make me grouchy.

One funny incident occurred when a stack of my Russians were hit by a StuG and everyone went berserk.  Their only target was the tank until they got one hex into the road, then had to turn and charge some infantry in a building.  It was fortified.  They knocked on that door for three turns, eventually being whittled down to a single wounded leader who would simply not bleed out.

He was eventually dispatched by a German half squad in the street.  Poor bastard.

Having accomplished my goals, the map looked like this

So, a scenario victory but not much progress.  Mike is a super defensive player and I am feeling like I am way behind at this point.  From now on, the Russian left is simply a bunch of place holders, while I try to break through in other places.

This is where it all comes undone.  Neither Mike nor I have played much night, but he felt that the Axis needs to have a counterattack, and that it should occur at night.  We missed a lot of stuff, and I forgot a ton of stuff which really cost me.  We both felt like fish out of water.

Mike came across the streets and got into my lines.  My units had little effect on his, I bought the Hungarian units fighting for the Russians as a cushion, but it made no difference.  I got smashed in virtually every CC and he took what he wanted.  Basically eliminating all of my gains from the previous scenario.

And as we started day 5, I now found myself outnumbered and on the attack again, needing to take back the territory I had already taken once.  Not a good situation. 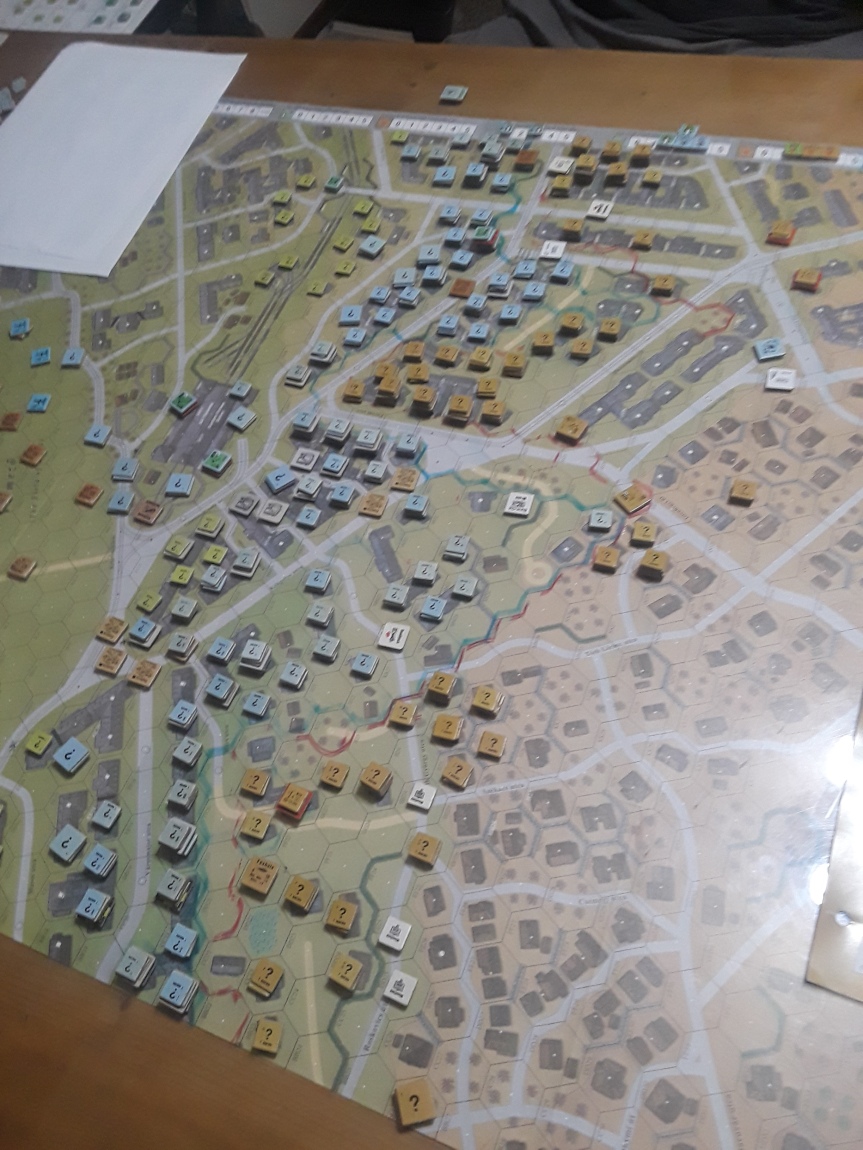 It didn’t end well.  Pressed for time, I attempted to move across the streets against superior numbers and got crushed.  And the Panthers were in town now.   We elected to end the campaign on that note, with my Russians getting the beat down.

At first we really enjoyed the campaign.  Movement was happening and Mike had to make some difficult choices, which he really enjoys in ASL.  If I played it again as the Russians I would get the initial breakthrough on the first couple of days and drive as far as I can, ears pinned back.

This one devolved into a face to face brute force struggle where large stacks of units face off across streets and throw huge numbers at each others.  Much more restrictive and cramped terrain than I have ever played in a CG previously

We both thought that the scenario victory conditions were a bit too easy and misleading.  The VC can be attained by taking a couple of multi-hex buildings.  On each of the first two days, I took my foot off the gas after gaining enough to win the day and I should have been pushing my foot to the floor instead.

Mike was frustrated with the way he was allowed to purchase his units between days.  He felt it was super scripted to play out much like the actual action.  He feels that the fun comes from the freedom to succeed or screw up on your own with your own decisions.

We really like Festung Budapest.  The scenarios are top notch and we haven’t played a bad one yet, but we were both a bit underwhelmed by CGIII.