Well, it’s been three months since I last confess……….er…….submitted a blog post.  Things got sideways for me.  Very busy, a stint in the hospital, a kid graduating college, end of the season at work and things just piled up.  Fortunately, I was able to keep up  with my squad leader games, so a lot of games have been finished.  Unfortunately I have been unable to post them here and there are enough now that I must summarize them without all the cool pictures and then I will be back on track.

Let’s get to them.

Got this game in with my friend and somewhat frequent opponent Will Willow of Detroit.  Will and I play pretty much every year face to face in Texas in June, and we occasionally get in a VASL game, like this one.  Next in line in my Road To Berlin series, a nice sized force of American GI’s have to keep a road net open from one side of board 2 to the far side of board 4.  The German force is formidable with some occupying the hills of board 2 to start and reinforcements entering to remove the Americans by force.

My Americans struggled to move the Germans away from the road but were successful in the end, the scenario had some interesting stuff, including Priests, which I had never played before, thirteen American Leaders, three modules of OBA which did absolutely nothing until I needed to win the game, when the only successful mission (harassing fire) broke the last good order German unit adjacent to the road net.

This picture sums up the OBA misery for both of us. 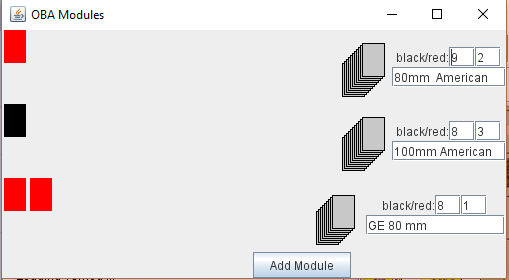 In an effort to get a night scenario in before the inevitable night CG date coming in my Festung Budapest CG, Jeff Buser volunteered to help me learn the ropes a bit.  So we got out this smallish night scenario and had a go with it on VASL.

Not much to tell here.  Some German 658s have to exit more of their number than a group of American Paratroopers.  A fallback scenario for my Paras on board 36, the Germans were herded along to one corner in an attempt to bottle them up.  Jeff had six crews and exited most of them, but I managed to hold off his infantry squads for the most part and we ended up at sixteen VP each.  At the time, we thought the game had ended in a tie, but later after I re-read the victory conditions, the Germans had to exit “more” than the Americans, giving me the victory.  But more importantly I thought the scenario would help me in my CG, but it failed miserably, as you’ll see in a future post.

My first opponent in the desert tournament put on by Carl Nogueira was Nate Stapf.  We had never played before, so it was nice to meet another ASL player.  I had the Germans in this one.  My twelve squads, some tanks and Half Tracks have to bust into a walled area in Tunisia but they are being stalked by six American Stuart light tanks and some truck mounted 75s.  Nate’s Stuarts made quick work of my armor and his 75’s busted up my infantry in short order making it near impossible for me to accomplish my goals.  I surrendered with a whimper.

This game was the start of my current frustration, and seems to have put me on a collision course with a string of horrid luck that I just can’s seem to shake.  Pierce Mason was my opponent.  My ten Shermans, two with Gyros and -1 leaders (5 on turn one and 5 on turn four) have to accumulate 25 CP or better while punching the ticket on three German tanks.  Pierce would get two MkIVs and two Panthers with some infantry in a small town.   Pierce burned two Shermans on American turn one, but I returned the favor and knocked out the guilty MkIV, leaving him with another MkIV and a Panther on board and one Panther entering on turn 3.  Here’s where the frustration starts.  I hit the on-board Panther five times, three times I needed a turret hit and hit the hull, two times I needed a hull hit and hit the turret.  The Panther calmly turned his turret and burned a third Sherman with a single shot and a bunch of modifiers.  I drove another Sherman up to bocage and got hull down to the MkIV and it turned it’s turret and got the turret hit on the first try seeing him for only two MP, knocking out my fourth tank.  The reinforcing Panther killed two more tanks and I quit in frustration.  Even with average luck, I should have had two dead German tanks.  This game just started a downhill momentum that I simply can’t seem to shake.

My next game in the Desert tournament was with Euan Denniston of New Zealand.

I will quit ASL before I ever play this scenario again.  My British start in what is essentially a column on a road, flanked by two hills filled with Germans and Italians in fortifications, with AA guns, and Italian tanks, and with the Germans getting the first shot.  When the British break and rout to the nearest woods, they generally contain minefields.  My luck on the dice was bad, and EVERYTHING Euan fired at died.  If I moved it, it died. If it routed, it died in the trees.  The object of this disaster is for the German to reach 35 CVP, with any I get subtracting from his total.  He led 31-1 after two turns.  This scenario was so much fun, that given the choice of playing it again or selling my kit, I’ll find the highest bidder and go fishing instead.

Larry Flaherty and I were matched up for the next round of the VASLeague tournament and chose this one.  Larry wanted the Americans, and his mix of Paras and first line GIs had to evict me from buildings on board 59.  For four turns, everything looked good for my German defenders and at the start of turn five, my dice were hot.  But if American troops can get close, the firepower coupled with a 10-2 leader can change the game in a hurry.  I went from holding all building locations  with two turns left, to holding none at the end of the game.  Failed almost every morale check over the last two turns and never rallied a single unit.

My Aussie friend Adam Lunney picked up this one with me for the Road to Berlin series.  This is a wee thing, four and a half turns, one building and nine squads between the both of us.  I usually shy away from scenarios this small because one event can end the whole thing.  That was the case here.  My American Paras were trying to evict Adam’s 658 Germans from a single stone multi-hex building on deluxe board d.  Got my smoke down, got my white phosphorus down, and busted into the building.  Looked like this one was over.  But with this much firepower in a four hex space, the game can turn quick.  One 24fp+2 shot later, I was on the ropes.  I kind of recovered but one German 658 in a fortified building location kept me out and Adam chalked up the victory.

An acronym for “GET OFF YOUR ASS” is the title of this scenario.  Another in the Road to Berlin, my longtime VASL opponent and friend Jason Wert took the German defenders.  I got American Paratroopers again, with three (count ’em) 81mm mortars to help them cross the wide open terrain of board 16 to take two large stone buildings on either end of board 23.  An 81mm mortar can change a scenario quickly.  Three of them can change it for good or for bad.  They are there for a reason, and if they don’t do what they are supposed to do, it can be disastrous.  Guess which way they went for me?   I got one, yes you read that right, one single solitary smoke round, then I broke two of them, then Jason’s sniper outright killed one of the crews.  They DID ABSOLUTELY NOTHING.  This scenario is 11 turns and they DID ABSOLUTELY NOTHING.  My Paras got some help from falling snow, then heavy falling snow.  But when we finally got close, the snow stopped.  Surprise!!!  Let me show you the dead pile:

Dead Paratroopers, one half squad at a time.

I actually took the building on the American left, but the American right got cut up really bad.  Goddamn mortarmen.

Ok that’s it up to this point.  I should be back on track and have some more detailed reports as they finish.  My luck is currently punching me in the nuts and I have struggled to maintain my cool.  But I will keep plugging away.  I’ve got way too much time and money invested in this game to give it up…………. unless the only scenario available to me is AP64, then I’ll have some gear for sale.