I consider myself an average player…..very average.  I have my good games and my bad games, just like anyone else.  Then I have one every once in a while that makes me wonder just what I have actually learned over the last 20’ish years playing ASL.  After having Jeff Sewell answer my call to play the BFP Blood and Jungle scenarios in order, the way I played the first one, BFP Armored Samurai, probably had him wondering if he had made a wise decision.  After all, there are only 46 more to go.

Armored Samurai features a Japanese force of first and second line units working with some extremely early tanks (set in 1932) attacking a similar Chinese group which lacks the tanks, but brings two heavy machine guns and two 70mm artillery guns.  The Chinese lack Dare Death capabilities and Banzai is N/A for the Japanese.  The Japansese tanks are the venerable World War 1 standout, FT-17.

I got the attacking Japanese, entering from off board.  I had five trucks, each of which were required to enter with a squad inside.  I HATE entering an ASL fight with troops on trucks.  I  had the option to enter them at any time of the scenario, so elected to bring them in later, hopefully pushing the Chinese defenders back far enough to allow me to enter them at least somewhat safely.  I had eight turns to take the back two buildings from Jeff’s Chinese without losing 33 points myself.

One of Jeff’s HMGs was in the back, upstairs on level two, it turned out to be a dominating position and really, it ended this scenario before I ever really got going.  Jeff’s dice were pretty good.  I didn’t get diced, he would break and lose that HMG later in the game, but his important rolls were exceptional.  Really, I put him in position to make those shots, so I had as much to do with it as he did.

As you can see, I decided to move out in the open area, on the side that was most heavily defended.  I wanted to get my leader into the factory and to the roof with his radio for some artillery action.  Trouble was, rooftops were not in play.  Yep, that’s the kind of quality ASL I was putting forward  Two of the FT-17 tanks would come straight down the middle and three to the bottom of the map, SSR transformed the railroad tracks to roads, and with 5 or 8 movement points for these speed demons, roads were helpful.  But these tanks were vulnerable to MG fire, the guns, and Chinese squads sneezing in their direction.

Jeff’s level two HMG would end up wrecking my attack.  The LMG up front on level one helped as much as possible.  Obviously, I had chosen badly, good thing I didn’t bring the trucks on early.

At one point, with a stack of 1st line Japanese squads and a -1 leader, I was faced with the choice of moving them one at a time with 7 morale, or as a stack with 9.  Japanese squads stacked with a leader get a morale boost of 1, making these 8 morale.  Throw in the leader, who, if not pinned (or eliminated) would add another 1, making them 9 morale.  I chose to move one squad by itself and two squads with the leader.  Jeff’s HMG made it all moot, scoring a KIA and my three units rolled 6, 6, 6 on the random selection rolls, eliminating them all.

Well, I didn’t get the trucks on until turn 4 as my on board infantry was getting hammered and quickly reduced.  I managed to get them on board and into the game safely but way too late.  By this time, I was just wanting to save face and get into one of the victory buildings, but nothing was going right and I was pretty demoralized.  I never got within sniffing distance of the victory buildings when I surrendered. 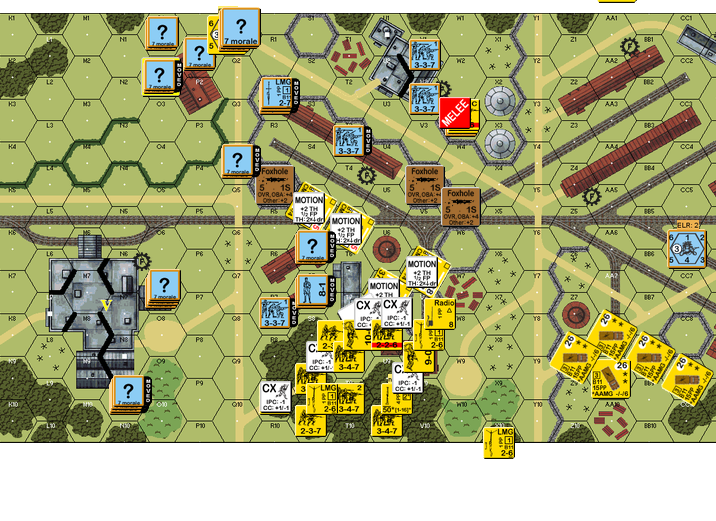 There was no point in continuing, I had three moves left to even step foot in the building in front of my troops.  At this point I was ready to move on to the next scenario.

I had played badly, missed some basic calculations, tried to get an OBA leader on a roof that was N/A, walked my poor troops out in the open in front of machine guns, (yes, very Japanese WWII thing to do I know, but not usually successful in ASL), got stopped cold without even threatening the buildings, and truly acted like I had never seen this game before.

I was fortunate to play Jeff in this one.  The biggest difference between us is that he crosses all his t’s and dots all his i’s.  Every unit has a purpose, he knows what he wants to do with them.  I am a far cry from that.

We have moved to BFP-27, where I will get to see how he handles the Japanese and I am already learning things just by clicking through his logfiles.  I am hoping that this will help me become a better player.

Next AAR in the pipeline-  Scenario J  The Bitche Salient with Will Willow.