My next opponent in the CYBERvasl tournament was Martin Kristensen.  We chose BFP-72 from the Blood and Jungle pack by Bounding Fire Productions.  B&J is a very popular scenario set featuring scenarios set in the Pacific theatre.

This scenario is an all infantry affair, taking place on two half boards.  I must say, this is the first scenario from the pack that I have been disappointed with.  Seven turns pitting attacking Dutch troops against an Indonesian Republican Army unit.  I got the defending IRA with 12 squads of varying quality, elite through conscript, a handful of weapons, decent leadership and a ton of concealment markers because the Dutch set up on board and the IRA needs some dummies, (in this game, they might as well all have been dummies).

My set up has very little wiggle room.  I am required to set up an MMC in each of the victory buildings, putting the units in the first building in jeopardy right off the bat.

Martin attacked skillfully, overwhelming the front building in short order and moving toward the other three immediately.  I had Molotov capability but Martin rarely had to get close enough for me to use them, setting up large firegroups.  And Molotovs are such an iffy thing, hard to get against infantry and you can set yourself on fire.  I guarantee you the numbskulls I had would have set themselves on fire.

My ability to maneuver or improve my position was very restricted, and Martin made sure that I wouldn’t be moving around much.  Only two moves in, and he had infested two buildings.

My fire was mostly ineffective the whole game, while my crappy troops with 2 ELR couldn’t take the heat, giving themselves up one after another.

Martin had cleaned out the front two buildings and had set up to put big fire on the Stone building on the right. 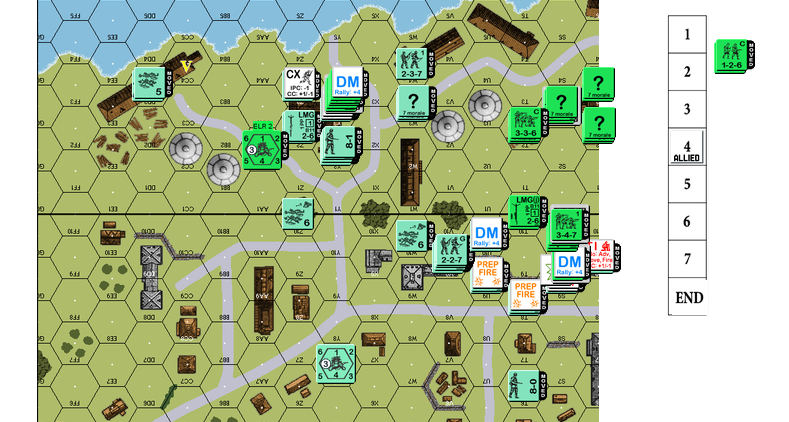 In turn 5 Martin set two records for opponents against me.  Most prisoner units held by one unit, and most impressive firegroup in my entire history of playing.

By the end of the scenario, I was reduced to a single good order squad to hang on to the last building.  I surrendered.

I am a BFP fan, but not of this scenario.  I did nothing but rout and surrender.  My units couldn’t move, and had no reason to.  Crappy troops with crappy ELR.  Sometimes, you find a scenario where one side can win, but has to get the shit kicked out of it to do so.  I feel like this is one of those scenarios.  If the IRA player can hang on to one location in one building long enough, he wins.

Martin was a joy to play, despite the scenario.

One thought on “BFP-72 Police Action”