Jason Wert and I moved to the second scenario of my ‘Road to Berlin’ trip which is listed on this blog.  J62 Lee’s Charge is a small scenario on half board 19 set in Belgium, January 3, 1945.  I am playing the allies in this series so got the Americans.  This one is as straightforward as you can get.  My seven squads, and six Shermans start on the right, and have to move off the board to the left.  I have to contend with deep snow and of course, the Germans.  Jason gets four first line squads and five elite half squads.  A PSK, a couple of fortified buildings and a 70mm OBA module.  I have some OBA myself, 100mm and an OP tank (my first ever).  5.5 turns doesn’t leave me much room for error.  Naturally, I get six Shermans and no smoke due to the deep snow. 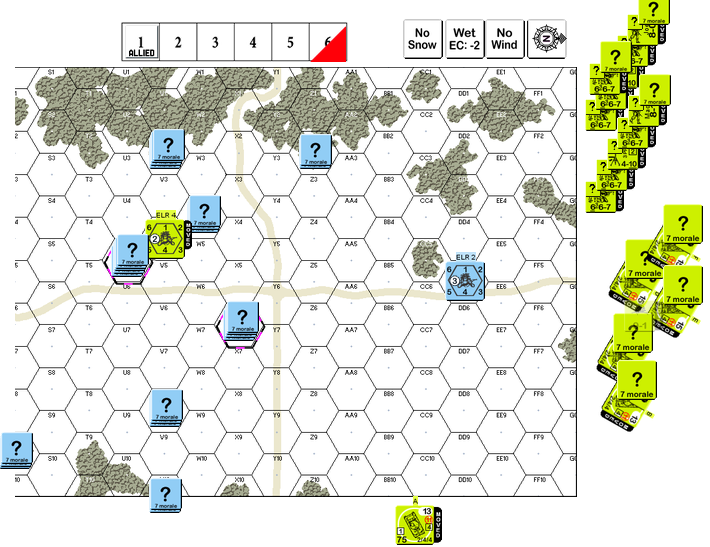 Pretty straight forward.  The tanks can’t go through the woods, and each hex costs two movement factors unless they are on that road.  The infantry costs extra mf also, so between the woods (yeah, not crossing the open, Jason gets an HMG, MMG and LMG) and the deep snow, it’s slow going.  I really have to pay attention to the end game.

As I move on the board, Jason get’s his OBA down nicely, catching some of my infantry in the woods.  I took a bit of a beating, but these are elite Americans and bounce back pretty quickly.  The tanks are fairly safe at a distance.  The OBA is a danger, but it looks like Jason will try to put it on my grunts.

When we started this game, I was pretty down in the dumps about my recent luck.  I even mentioned to Jason that I would probably draw a red chit on my OBA.  When will I ever learn to NOT CALL MY SHOT before it happens.  Yep, it was red, and I thought ‘here I go again’.  Then I disabled a Sherman gun, and Jason malfed his heavy machinegun. 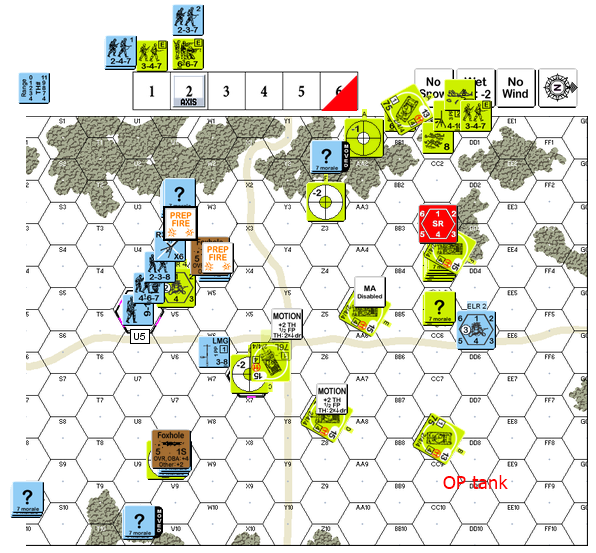 It was at this moment that my luck started to turn around.  I managed to break the German unit in the forward fortified building and drive him out of there.  Then I scored a critical hit on the other fortified building, but managed only negligible results.  Not to be discouraged, the same tank scored a second crit on it’s next shot.  This time, the building came down on the German units, eliminating them all.  The center was now wide open.

I was definitely not out of the woods yet.  Jason still had OBA, a Panzerschrek, and since it’s 1945, a plethora of Panzerfausts.

I finally got my OBA rolling, but really didn’t get much out of it.  Jason on the other hand, plopped it right down in the middle of the board, on top of his previously occupied fortified building, and at the crossroads.  Forcing my tanks to go around it and closer to his infantry on the edge.  My ground pounders had recovered and were slowly making their way through the woods.  My intention was to give the German infantry something else to deal with.  I could win with tanks if I could get them off the board.

With time ticking away, I had to move forward and I did a terrible job planning ahead, almost costing me the game because of my crappy math skills.  I could have exited a couple of tanks early, but decided to leave them at the board edge to keep the remaining German grunts from closing on the Shermans I had to leave in motion to have enough points to exit.  Jason was ignoring my infantry…… his math skills are better than mine, knowing that a couple of knocked out Shermans would create serious problems for me.

His radioman was going to be a pain in my ass too.  Dropping the OBA right on top of my tank blob.  He moved his infantry out and got set up for anti-tank efforts.  Luck abandoned Jason at this point.  An immobilization from the OBA or a couple of PF hits would have really put a crimp in my style.  I fired everything I had but he still had a chance.  Luck was with me in this one though, Jason couldn’t get the ‘fausts he needed, and my tanks exited the OBA and the board for the win. 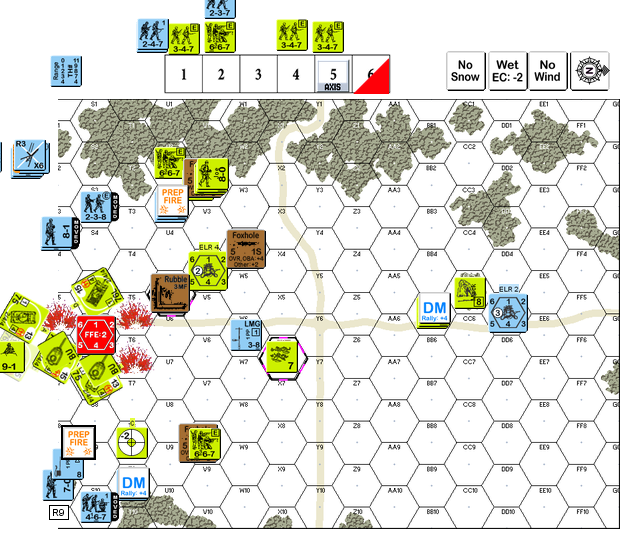 It was my first victory in a long while (I finished this one just before my victory in J166 Maximum Aggression .)  Jason made it difficult for me of course.  Fortune finally smiled on me with the back to back crits from the same Sherman.

I thought the scenario was OK.  The deep snow and small playing area with two OBA modules dueling it out makes for a cramped area for tanks.  Luck turned on Jason halfway through the game and I fumbled and bumbled my way to the board edge.

20 years and I still play like a raw rookie at times.  Thanks to Jason for going down this Road to Berlin with me, we have queued up the next one already.  I’m going to start some of these scenarios with Adam Lunney, another long time opponent I have never actually met.  If I don’t, Jason and I will die of old age before we get to May 1945.