Mike and I got together to play the full Dien Bien Phu: The Final Gamble scenario.  Our first two games were Scenario B, which basically cuts the first two strongpoints:  Gabrielle and Beatrice, out of the game and cutting 6 turns.  We took on Scenario A, with the Vietminh starting on the outer edge of the map.  We diced for sides and I got the French, a tough task, because Mike had a plan for the Vietminh.

We discussed the game after each playing, going over options for both sides, hemming and hawing about what we thought would work and what was folly.  We didn’t always agree, but we hashed a few things out and I really pay attention to what Mike has to say because he knows what he’s talking about and usually after telling me what works, shows me by killing all my troops.

After two playings, Mike decided that assaulting Gabrielle and Beatrice would be silly.  Go around them, cut them off and eliminate them without a fight.  He also thought it would be interesting to see what would happen by dropping 10 or more artillery missions every other turn, thereby blanketing the French compound, and concentrating on the Legionnaire’s artillery.  Every time an artillery unit flips, an ammo space is lost on the ammo track.  Additionally, he would be virtually guaranteed the elimination of one of the French trucks, eventually impacting the ability of the French player to fly in ammo for the artillery. 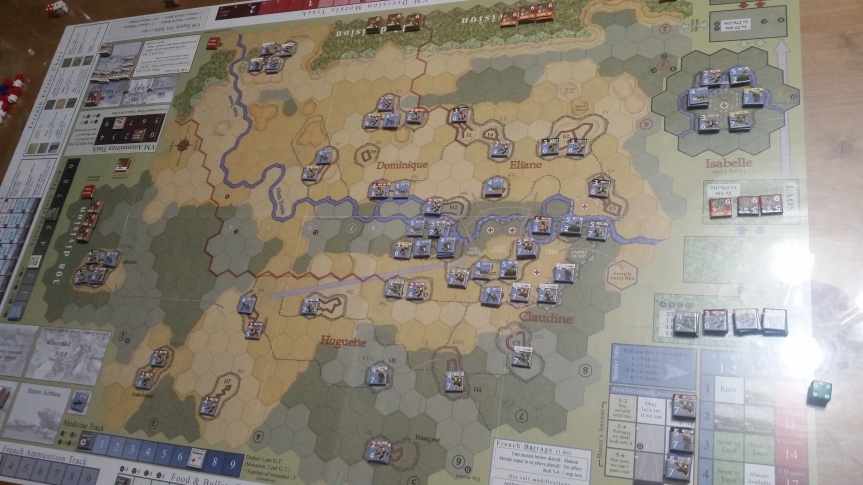 True to his word, Mike sent his Vietminh around Gabrielle and Beatrice, forming a line to cut them off from their ability to be supplied.  I sent out a small detachment with tanks to open a hole and got the units at Gabrielle back to the French lines.  The Beatrice units were lost.  Once Gabrielle was abandoned, and the Beatrice units were captured, a unit was sent back to each to capture the strongpoints.

I feel after seeing the results of the first few turns, that I really missed the boat on my first turn.  Knowing what Mike’s plan for my artillery units was, I should have simply spent every last round of ammo hitting his VM units standing in the open.  It wouldn’t have been a sure thing, it starts out at a 50/50 shot of hitting and flipping one of them, and I would be further penalized with them being more than 3 hexes from any French units, but I needed to use them while I had them, forcing Mike to spend reinforcement points before he really even got started.

As it was, moving 5 hexes per turn, his VM units hit my forward units at the main camp on turn 3, four turns before the start of scenario B, which starts short of that.

After seeing the results of Mike’s plan, I thought it might be a good idea to see what other players thought, so I made some queries at Consimworld.  I got a few responses, including from designer Kim Kanger himself.  They all thought that assaulting the first two strongpoints were critical, and that outrunning the trench lines was not a good idea.  Mike thought otherwise and it paid off, he was already 7 turns ahead of the “fortifications taken” pace.  The penalty for VM units being hit by artillery out of their trench lines is only adding 1 to the die, making it a hit on a roll of 4-6.  In fact the only reason Mike was interested in moving the trench lines forward was to have an impact on the airdrop chart.  Speaking of the airdrop chart:

The airdrop grid was pretty good to me the whole game.  I had only two times where I rolled a six, for a possibility to eliminate nine spots, but I got lucky on one of those rolls, hitting a few spots that had already been eliminated.  Supply never really became an issue for me in this game, except for the artillery ammo but Mike had a lot to do with that.

Mike believes that the path to victory for the VM is straight up the middle and he pushed division 312 hard for the first few turns of contact.  The outer strongholds of Huguette are untenable and have to be surrendered at a certain point, or those units will also be cut off.  Dominique is much more defensible, but the push up the middle soon put those French units in jeopardy also.

With the center in trouble, I was forced to give ground on the flanks, get those units back to the camp and shore up the hole.  The VM artillery was creating casualties on an epic scale.  When the area becomes constricted, it really is just shooting fish in a barrel.  I was unlucky on my attempts to get the commander in Hanoi to send my reinforcements, at least early in the game.  After my troops were pretty much surrounded, and the artillery was killing French units in droves, I started to get Paratroop reinforcements.  And honestly, I was extremely lucky, not losing a single reinforcing unit en route to Dien Bien Phu.  But they were just plugging holes and becoming artillery casualties the turn after they landed.

I had a fantastic opportunity to encircle and eliminate an entire regiment of VM when they pushed too far.  I got them surrounded and isolated.  I was pretty stoked, that would be a huge coup and a serious problem for Mike.  He wiggled off the hook though and turned the tables on me, surrounding some of my units in turn.

My attempt to surround the VM Regiment and eliminate it was on turn EIGHT!  This scenario is 21 turns long.  I managed to hold out for 4 more turns.  We were rolling the French surrender number thirteen turns before the end of the game.  My last surrender roll was a 7.  If I had had one more pip on the dice, I would have surrendered on turn twelve.  We called it there as I was out of reinforcements and the push was relentless.  Mike actually stopped  the VM artillery because his units were so infiltrated into my lines that any artillery counter would have hit his own troops, and he had just taken two of the hospital hexes.

The designer notes say “do not give up”, but we were just prolonging the inevitable.

Conclusions on DBP:TFG after three plays:

First off, we both love this game.  Some of the ideas that Kim Kanger came up with to simulate this epic battle are as Mike says “very clever”.  The supply tracks for the French, and the morale and reinforcement tracks for the Vietminh are incredibly effective.  The way the VM reinforcement track simulates four divisions, made up of three regiments each while keeping counter clutter absolutely minimal are incredibly impressive.  The game simulates larger VM units vs. smaller French units and does so spectacularly well.

The Airdrop grid and reinforcement track for the French are nothing short of genius and the backbone of the game.  It creates a tense moment each French turn for both the French player and the VM player.

I personally love the counter art.  This is the kind of thing I would love to see more in games (even with my small exposure to all of the variety out there).

I’m afraid we both had the same opinion of Scenario A.  We of course, don’t know what happened in playtest and would not presume to assume anything.  We wonder, however if perhaps no one ever said “ok, what happens if the Vietminh do THIS?”  After all, the most forward strongholds, Gabrielle and Beatrice were assaulted and taken at the beginning of the campaign.  One would think that that is what you are supposed to do in a game.

It is of course, possible that we messed something up, we certainly have before, but it didn’t take Mike long to ask the question “why would I do that?”  What can I say….. it’s what he does.  It seems like an exploit sitting there waiting for someone to take it.

To be fair, I failed to hit him with the French guns during his approach to the camp proper, but even then I would have needed a 5 or 6 on a single die for each ammo spot I spent.  Far from a sure thing.

I also must qualify this playing by stating that my assaults against his units were mostly ineffective.  The last three turns I made probably a dozen assaults and only got to roll for results on half of them, and actually caused casualties on a mere two.  My artillery rolls were pathetic and Mike’s assaults were devastating late game.  He simply never failed to reduce or eliminate my units.  It was a bit (lot) frustrating.

Scenario B is the way to go in our opinion.  Both playings came down to the end with surrender rolls in the last few turns, as expected.  I hate the idea of cutting off the first two strongpoints and starting there, but it is simply a better game and for us, Gabrielle and especially Beatrice (doomed in the game and in the real battle) add nothing.  Scenario B was much more enjoyable, and we felt the feel of the in-game battle was present.

We will be coming back to this game soon, because we want to see how scenarios ‘C’ and ‘D’ play.

For Mike, the ultimate question for satisfaction in a wargame is “did I feel it made me make decisions like our real life counterparts did in the battle being simulated, while being playable, and enjoyable?”.  His answer was a resounding ‘YES’

For me, I love the subject matter, the game, the counters, the mechanics and the way it feels.  I’ve always had a passing interest in this battle for who knows why, I don’t.  But Mr. Kanger has stoked that interest, pushed my nose into the subject matter and is going to force me to have a Dien Bien Phu history page here on my blog.

My advice is to find a copy of this game for two reasons:

That’s it, we’re off to play some Advanced Squad Leader in Korea next, Mike has been waiting 20 years for this, I hope I can provide a quality game for him.