Thumbing through my scenarios looking for one to play via PBEM on VASL (only recently figured out what happened to my computer and VASL from before) I stopped on 87 Good Night Sweet Prince.  I have never played one of the two(?) scenarios with the Nimbus motorcycles.  After asking for an opponent at Game Squad, Richard Carter took me up on it.  I got the attack with the Germans.

One thing to know about me and ASL is I lose a LOT, but have passed the point of caring.  Now I just play, and an occasional victory is a small morale booster.  Another thing would be that I have a phobia about crossing ASL bridges.  I swore off playing any bridge scenario a long time ago.  But I know I really ought to learn how to do it, so here I am…

I lined up to make my approach to the river behind the woods.  The town has a steeple location, and Rick had a number of multiple ROF weapons so I didn’t want to get caught out in the open too much.  Seeing that I needed to get 21 points across the river in good order for the victory, I needed live units.

I made it to the tree line in pretty good order, having sent a -1 leader and squad down the other board edge with one of my three PZIII tanks using armored assault. 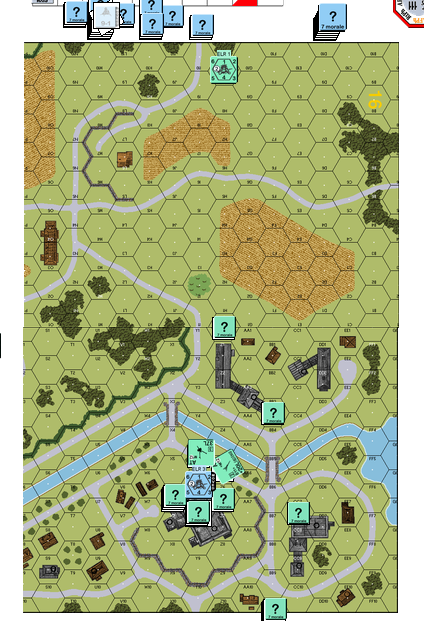 I got some smoke from one of my tanks and the mild breeze helped cover my approach to the woods.  The concealment stripping half squad in the front buildings put a low fp shot on my armored assaulting troops on the other side, breaking one of them and slowing up their approach.  It looked like Rick was setting up a firelane down the right side bridge, but he would abandon it soon.  He got two wire counters and with the first one popping up in front of the left side bridge it was pretty easy to determine where the other one was going to be.  The AT guns had to set up in road hexes on the Dane side of the river, and had to set up unconcealed.  The 37L had 10 for a breakdown number, but also had a fanatic crew.  He would rule the day as I was unable to break the crew or the gun.

My intention was to set up a spot to put fire on the Danes from the hedge line, knock out the 37L gun crew and drive over the wire with tanks.  I got set up, the Danish HS ended up getting stuck on his own wire and I was getting ready to put my plan into action.  If only I didn’t have a bunch of knuckleheads on my team…. 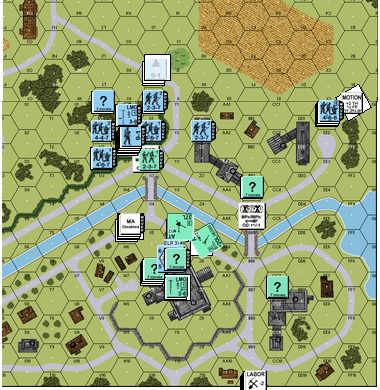 The tree line troops couldn’t stand up to all the 4fp shots coming their way, they weren’t even able to break the HS on the wire.  Luck had abandoned me as my troops broke and ran back to mama to try to rally.  I decided to try to get to the buildings for an attempt at the bridge on the other side and started filtering units over there.  I got a reinforcing PZIII on turn 4 that I could bring in on the Danish board, but my side of the canal.  I started rallying my troops for another try at suppressing fire. 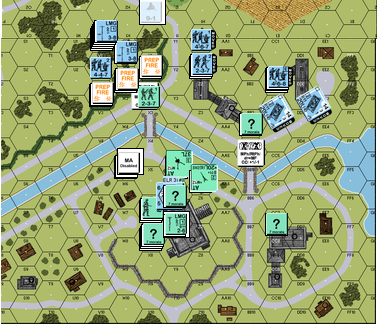 Still with no luck trying to get the 37L crew to go away.  Even when I put together a nice firegroup, I couldn’t get results on any enemy unit.  In fact, the only Danish unit I would hurt in any way shape or form was a concealed squad in front of the right hand bridge.  The Danish 20L tried to put one of my tanks out of action, but despite hitting it a couple of times, it was unable to get the job done.  With the turns clicking away, I needed to get set up to cross the bridge and I was only going to get one shot at it, so I made a play for the bridge on the right. 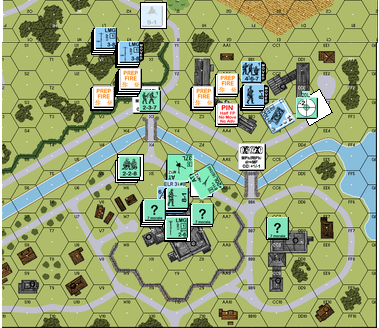 The wire was going to be a problem for my ground pounders and I needed it gone.  The tanks could do it, but it was a long, long way from a gimme.  I moved my first tank out for a shot at the wire, and possibly some Smoke Dispenser help.  Meanwhile the hedgeline troop had decided to hold a rally party as practically everyone broke and ran.  That side of the map was a complete disaster.  My tank got to the wire, and luck finally threw me a scrap……. he eliminated the wire.  But the 37L put him out of business, not even doing me the favor of burning him so I could have some guaranteed smoke. 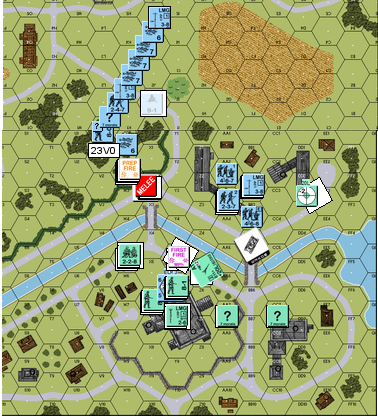 If no tanks survived the crossing, it was going to be very difficult to reach the 21 points I needed to win.  Considering my poor luck on my shots and morale checks, the fact that I was going to have at least a shot was pretty incredible.  My broken unit pile was huge, I was one tank down, and still needed to cross.  I somehow managed to get two tanks across the river.  I wanted to move them out of harm’s way but I still needed to get some Infantry across and survive ’til game end.  My smoke dispensers failed me and MG attempts to break the 20L crew only added insult to injury as I broke the CMG on the first one, apparently my tank’s crews were almost as inept as my suppression group. 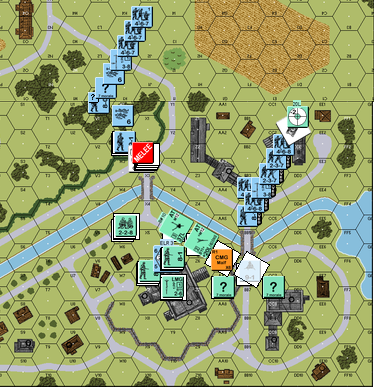 I managed to get the infantry into the hex with the dead tank, and my suppression troops began to rally, was my luck going to change here?  I sent some half squads into CC with the enemy stuck in the wire getting 2-1 odds……. nada.  That little bastard would survive the entire game.

Rick got his prep fire ready to go in the bottom half of turn 6.  The 37L put both of my tanks out of my misery…. even getting a kill on an intensive fire shot with a breakdown number now at 8.  The steeple lmg and the HMG at the bottom floor in the front of the building began a rate of fire tear at my poor boys on the bridge…  When he was finished, all but one had broken, and then one of the broken units battle hardened.  I was left with two squads and a hero, the leader had died in the withering fire……. 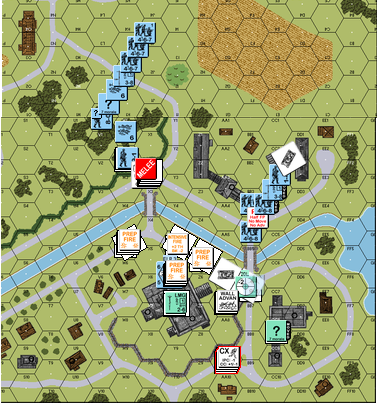 And with exactly 21 points of infantry left, two of which were broken and a ‘man of the hour’ half squad clogging up my route on the left bridge, I would have to rally everyone, and get them all across the bridge unscathed and unpinned in two moves.

I don’t like to use the phrase ‘I got diced’, and I don’t believe that is what happened here.  Rick did get the rolls he needed and I failed to get mine.  Trying to cross a bridge with no smoke….. I failed with the tanks AND the infantry….. is difficult at best.  His AT gun and HS on the wire were the MVP’s.  Through all 18 of my fire phases (prep, d-fire, a-fire)  I got exactly one result….. a pin on my side of the river and that unit was eventually defeated in CC.  So without any suppressing fire, I have only myself and my idiot troops to blame…..

I did however get some tanks across the river!!  The best I had ever managed before this was getting two squads across a footbridge TWICE!!!!!………  yeah, once across, and once routing back across it…….