Next on our playlist is Vietnam 1965-1975.  I used to own this game, but sold it when it looked like I wouldn’t ever be able to find an opponent.  Mike still had his though.  The rulebook is a bit on the thicker side, but when you are used to the ASL rulebook, this one is cake.

This is a game detailing the entire Vietnam conflict from 1965 to 1975 just as the title says.  We have found some nice resources on-line for tips and examples of play, the best of which is located here.

Mike has wanted to play the American experience of this game for a long time.  The politics and pacification problems are right up his alley game-wise.  Playing one of the scenarios was out of the question, the campaign was the only thing that was going to scratch that itch.  He had his ARVN and American Marines set up when I got there, I would then need to get my NVA and VC purchases done.  From there we would go through the first seasonal interphase to begin play in the summer season of 1965.

Keep in mind that neither of us have any idea how to go about our side’s business, we are completely winging it.  Mike set up most of his forces along the coast in the population centers, with a heavy presence around Saigon in the South.  In the North, a show of force around Hue, with the US Marines heavily ensconced in Da Nang.  In fact, when I was looking at the map after arriving, Mike was pointing out places on the map and said “This is Da Nang, but you won’t be taking that.”  Nice.

I made my purchases, and it took quite a while to place my pieces.  This game has a lot going on.  My initial purchases before the seasonal interphase allows me to put units in any unoccupied hex without regard to the six hex sphere of influence each American/ARVN unit exerts.  My goal is to disrupt the U.S. pacification effort, swing the population of each province my direction and get U.S. commitment to exceed morale.  Battles will rarely, if ever, go my way. The American/ARVN forces are simply too strong for my units and the VC in particular to stand toe to toe.  I WILL get my ass handed to me on a regular basis, but as long as Mike has to increase his commitment and damage his morale, I am doing my job.  I need to establish a presence, and take as many provincial capitals as possible, melting into the jungle before Mike can squash them.  Essentially making Mike play a Southeast Asia form of whack-a-mole.

I decided to invest myself most heavily in the center of South Vietnam, occupying a number of Provincial Capitals, and a pair of ports.  Most of my units are Battalion size, and unfortunately I am required to pull the Battalion counters randomly and place them on the board without seeing their strength.  Only once they are placed will I be able to see the combat effectiveness of each unit. 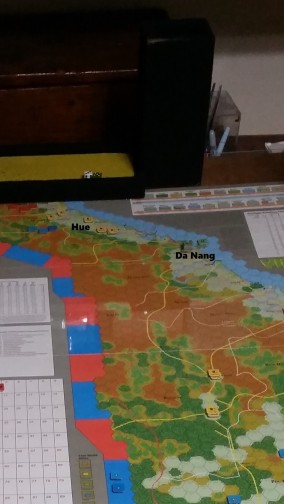 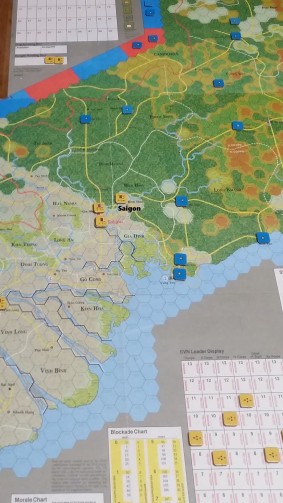 We struggled with the process of the seasonal interphase, but eventually got it hammered out.  Mike reinforced Saigon with a large group of ARVN forces. When it came to my turn things became a bit more difficult for me.  Unlike the first initial phase, the recruitment phase was very restrictive for me.  I was only allowed a small amount of reinforcements along the coast due to me allocating a small number for it the previous season (initial season)  I also had to ensure that I could supply those units so they had to be 5 hexes or less from the coast, while my Ho Chi Min trail supplied units had to be within 8 hexes of the trail.  Furthermore, I was only allowed to place a number of units equal to the population I controlled in each province.  When we got done, this was the result: 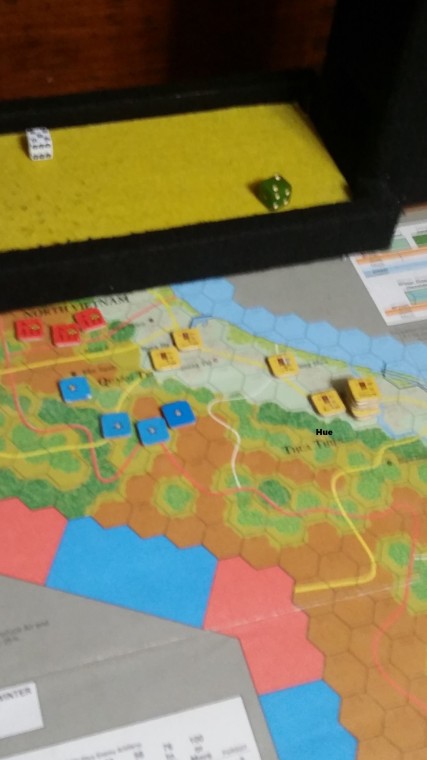 The South, the North.

When we reconvene, we will muddle our way through the Summer of ’65 season.  I will be attempting to keep the US/ARVN at arm’s length while Mike will be trying to bring my VC to heel using his greater mobility with air transport and riverine ability.  Supporting artillery and naval fire will have a great effect on my abilities.  He can also use strategic air to bomb the trail, and make the risky decision to invade either Cambodia or Laos.  Both of which increase his commitment and lower morale.  Even though I really don’t want to face actual US forces, every time he has to bring them into the game increases his commitment and brings me closer to victory.  South Vietnam leader morale also plays a part, so anytime I can force him to replace this ARVN leadership is a plus.  The crown jewel for me though is Saigon.  If I have a shot at it, I have to give it a try.  VC ownership of Saigon is a North victory.